Two years ago Gretchen Liu, 78, had a transient ischemic attack — which experts sometimes call a “mini stroke” — while on a trip to China. After she recovered and returned home to San Francisco, her doctor prescribed a generic medication called telmisartan to help manage her blood pressure.

Liu and her husband Z. Ming Ma, a retired physicist, are insured through an Anthem Medicare plan. Ma ordered the telmisartan through Express Scripts, the company that manages pharmacy benefits for Anthem and also provides a mail-order service.

“I couldn’t understand it — it’s a generic,” said Ma. “But it was a serious situation, so I just got it.”

A month later, Ma and his wife were about to leave on another trip, and Ma needed to stock up on her medication. Because 90 days hadn’t yet passed, Anthem wouldn’t cover it. So during a trip to his local Costco, Ma asked the pharmacist how much it would cost if he got the prescription there and paid out of pocket.

The pharmacist told him it would cost about $40.

“I was very shocked,” said Ma. “I had no idea if I asked to pay cash, they’d give me a different price.”

Insurance copays are higher than the cost of the drug about 25 percent of the time, according to a study published in March by the University of Southern California’s Schaeffer Center for Health Policy and Economics.

USC researchers analyzed 9.5 million prescriptions filled during the first half of 2013. They compared the copay amount to what the pharmacy was reimbursed for the medication and found in the cases where the copay was higher, the overpayments averaged $7.69, totaling $135 million that year.

USC economist Karen Van Nuys, a lead author of the study, had her own story of overpayment. She discovered she could buy a one-year supply of her generic heart medication for $35 out of pocket instead of $120 using her health insurance.

Van Nuys said her experience, and media reports she had read about the practice, spurred her and her colleagues to conduct the study. She had also heard industry lobbyists refer to the practice as “outlier.”

“I wouldn’t call one in four an ‘outlier practice,’” Van Nuys said.

“You have insurance because your belief is, you’re paying premiums, so when you need care, a large fraction of that cost is going to be borne by your insurance company,” said Geoffrey Joyce, a USC economist who co-authored the study with Van Nuys. “The whole notion that you are paying more for the drug with insurance is just mind boggling, to think that they’re doing this and getting away with it.” 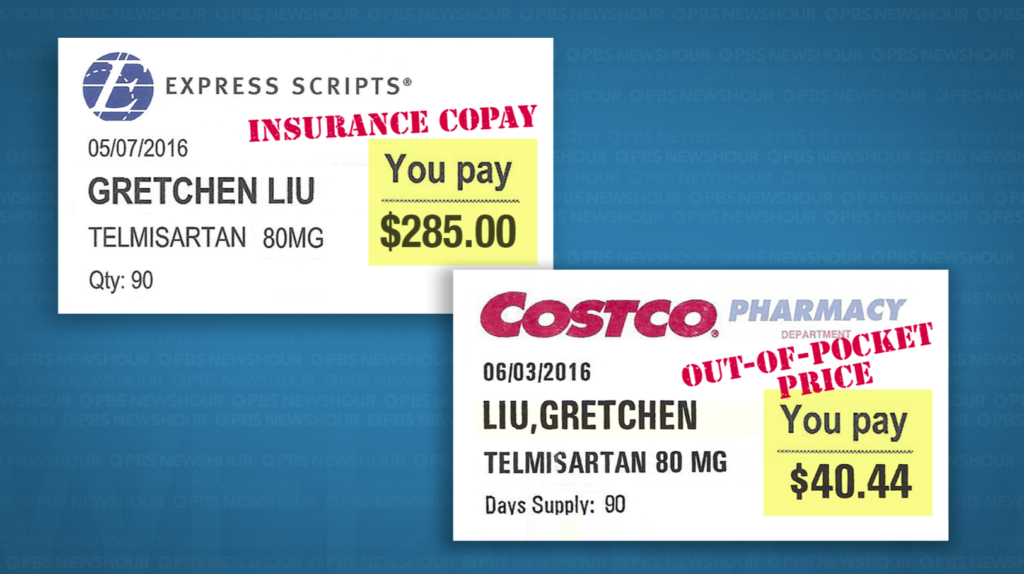 Joyce told PBS NewsHour Weekend the inflated copays could be explained by the role in the pharmaceutical supply chain played by pharmacy benefit managers, or PBMs. He explained that insurers outsource the management of prescription drug benefits to pharmacy benefit managers, which determine what drugs will be covered by a health insurance plan, and what the copay will be. “PBMs run the show,” said Joyce.

In the case of Express Scripts, the company manages pharmacy benefits for insurers and also provides a prescription mail-delivery service.

Express Scripts spokesperson Brian Henry confirmed to PBS NewsHour Weekend the $285 copay that Ma paid in 2016 for his wife’s telmisartan was correct, but didn’t provide an explanation as to why it was so much higher than the $40 Costco price. Henry said that big retailers like Costco sometimes offer deep discounts on drugs through low-cost generics programs.

USC’s Geoffrey Joyce said it is possible that Costco negotiated a better deal on telmisartan from the drug’s maker than Express Scripts did, and thus could sell it for cheaper. But, he said, the price difference, $285 versus $40, was too large for this to be the likely explanation.

Rebates help determine where a drug will be placed on a health plan’s formulary. Formularies often have “tiers” that determine what the copay will be, with a “tier one” drug often being the cheapest, and the higher tiers more expensive.

Pharmacy benefit managers usually take a cut of the rebate and then pass them on to the insurer. Insurers say they use use the money to lower costs for patients.

Joy said a big rebate to a pharmacy benefit manager can mean placement on a low tier with a low copayment, which helps drives more patients to take that drug.

In the case of Ma’s telmisartan, Express Scripts confirmed to PBS NewsHour Weekend that the generic drug was designated a “nonpreferred brand,” which put it on the plan’s highest tier with the highest copay.

Joyce said sometimes pharmacy benefit managers try to push customers to take another medication for which it had negotiated a bigger rebate. “It’s financially in their benefit that you take the other drug,” said Joyce. “But that’s of little consolation to the person who just goes to the pharmacy with a prescription that their physician gave them.”

But Joyce said the pharmacy benefit managers also profit when collecting copays that are higher than the cost of the drug.

In recent years, the industry has taken a lot of heat from the media and elected officials over a controversial practice called “clawbacks.” This happens when a pharmacist collects a copay at the cash register that’s higher than the cost of the drug, and the pharmacy benefit manager takes most of the difference.

The three largest pharmacy benefit managers – Express Scripts, CVS Caremark, and OptumRx – all told PBS NewsHour Weekend they do not engage in clawbacks.

But Howard Jacobson, a pharmacist at Rockville Centre Pharmacy in Long Island, NY, showed PBS NewsHour Weekend several recent examples of clawbacks. In one instance, Howardson acquired a dose of the generic diabetes Metformin for $1.61. He said if a patient paid out-of-pocket, he likely would sell if for $4. But in a recent transaction, the pharmacy benefit manager told Jacobson to collect a $10.84 copay from the patient, and it took back $8.91.

In the case of Z. Ming Ma and his wife Gretchen Liu, there was no pharmacist involved, because they purchased the medication directly from Express Scripts.

Express Scripts’ Brian Henry reiterated to PBS NewsHour Weekend that the company does not engage in clawbacks and opposes the practice. And he also blamed the health insurer, Anthem, for Ma’s high copay. “Anthem has its own Pharmacy and Therapeutics committee that evaluates placement of drugs on the formulary based on their own clinical and cost review – thus setting their own formulary and pricing,” Henry said in an email.

But Lori McLaughlin, a spokesperson for Anthem, pointed the finger back at Express Scripts. “Anthem currently contracts with Express Scripts for pharmacy benefit manager services and under that agreement Express Scripts provides the drug pricing,” she said in a statement. “Anthem is committed to ensuring consumers have expanded access to high-quality, affordable health care which includes access to prescription drugs at a reasonable price.”

McLaughlin also pointed to a lawsuit filed in March 2016 by Anthem against Express Scripts, for, she said, “breach of its obligation to provide competitive pharmacy pricing.”

As for Express Scripts’ contention that it doesn’t engage in clawbacks, USC’s Karen Van Nuys said it’s a matter of semantics. “Whenever the copay is higher than the cash price, and the difference isn’t reimbursed to the patient, someone else must be pocketing the difference,” Van Nuys said. “Maybe it isn’t technically called a clawback, but the principle is the same.”

So what’s a patient to do? Websites like GoodRx and WellRx can help consumers find the best prices at local pharmacies. They provide coupons and savings cards for certain drugs as well as out-of-pocket price information, which could be less than a copay.

It’s not always better to pay out-of-pocket, even if it’s cheaper. Patients need to look at the terms of their insurance plans and do the math.If a patient has a high deductible, it might make more sense in the long-run to pay the higher price and use up the deductible so insurance kicks in sooner.

Z. Ming Ma said he does find the Express Scripts home delivery service convenient. But he wasn’t happy about the price of his wife’s medication, and is glad he found another way to buy it.

This story has been updated to reflect that Gretchen Liu is 78 years old.

This website uses cookies to improve your experience while you navigate through the website. Out of these, the cookies that are categorized as necessary are stored on your browser as they are essential for the working of basic functionalities of the website. We also use third-party cookies that help us analyze and understand how you use this website. These cookies will be stored in your browser only with your consent. You also have the option to opt-out of these cookies. But opting out of some of these cookies may affect your browsing experience.
Necessary Always Enabled
Necessary cookies are absolutely essential for the website to function properly. This category only includes cookies that ensures basic functionalities and security features of the website. These cookies do not store any personal information.
Non-necessary
Any cookies that may not be particularly necessary for the website to function and is used specifically to collect user personal data via analytics, ads, other embedded contents are termed as non-necessary cookies. It is mandatory to procure user consent prior to running these cookies on your website.
SAVE & ACCEPT